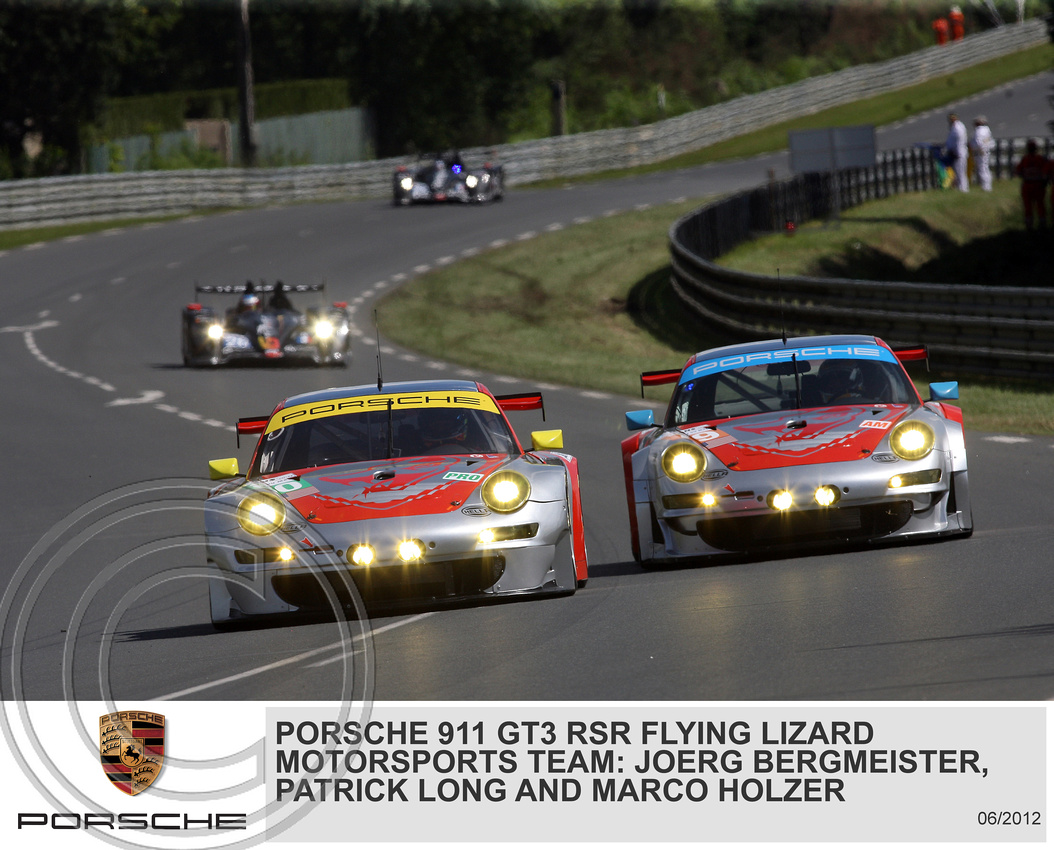 The Le Mans 24 hour race is legendary and the greatest challenge that motorsport has to offer. This weekend, June 16/17, many Porsche customer teams from Europe and the USA will tackle the 80th running of the French long distance motor race.

Porsche works drivers and double Le Mans class winners Marc Lieb (Germany) and Richard Lietz (Austria) will also be racing for points in the new World Endurance Championship with the Porsche 911 GT3 RSR fielded by the Felbermayr-Proton team. With 16 overall and 98 class victories, Porsche is the most successful manufacturer in the history of the Le Mans 24 Hours.

The race
The world’s most famous endurance race was contested for the first time in 1923. Each year it attracts the best sports car drivers from around the globe and more than 250,000 spectators. Hollywood also set a cinematic monument with the iconic event. The 1970 film ‘Le Mans’ featuring Steve McQueen in the lead role, driving a Porsche 917, is one of the best racing movies of all time.

The circuit
One of the fastest and oldest race tracks in the world, the 13.65 km Circuit des 24 Heures has a unique character. Aside from its legendary corners, Mulsanne and Tertre Rouge, the trademark of the race track is its famed Hunaudières straight, where top speeds of up to 400 kph have been reached. Around 75 per cent of a lap is taken at full throttle.

The Felbermayr-Proton squad field the Porsche 911 GT3 RSR with Porsche works drivers Marc Lieb and Richard Lietz and are keen to continue their recent sterling performances. The outfit started the new World Endurance Championship with second place at Sebring and followed up with their first win of the season at Spa. At Le Mans the pair receives back-up from Wolf Henzler (Germany), with whom they won in Le Mans in 2010.

In the GTE Am class, where only last year’s vehicles are eligible to start and just one professional driver is permitted per car, Italians Gianluca Roda and Paolo Ruberti join forces with team owner Christian Ried in the second Porsche 911 GT3 RSR run by Felbermayr-Proton to campaign for their second win in the World Endurance Championship.

Other squads to contest this class with the 911 are Flying Lizard Motorsports with Porsche works driver Patrick Pilet (France) as one of the pilots as well as the customer teams IMSA Performance Matmut, Prospeed Competition and JWA-AVILA. 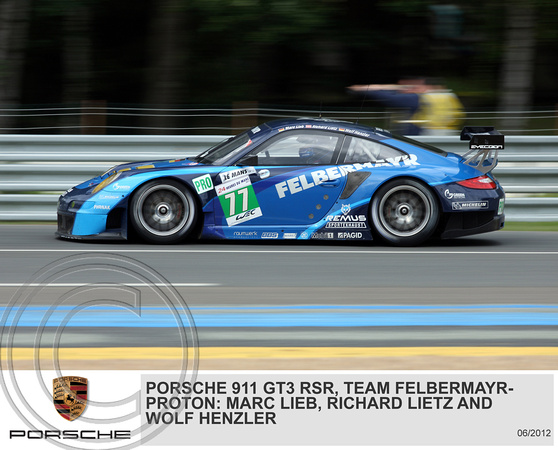 The Porsche 911 GT3 RSR
As the top model in the range of customer racing vehicles from Porsche Motorsport, based in Weissach, Germany, the 911 GT3 RSR headed into the 2012 racing season with extensive modifications. Particularly noticeable is the widening of the body by 48 millimetres. The aerodynamic design package is supplemented by new engine air intake ducting. The 911 GT3 RSR is based on the road-going 911 GT3 RS and is powered by a rear-mounted flat-six engine, tuned to produce 460 hp.

Porsche and Le Mans – an unprecedented success story
In 1970 at the wheel of a Porsche 917 short-tail, Hans Herrmann and Richard Attwood clinched the first of 16 overall victories for the most successful manufacturer in the history of the race.

The most successful Porsche pilots at Le Mans are Jacky Ickx and Derek Bell with four wins each.

The schedule
Free practice was on Wednesday, June 13, between 16.00 to 20.00 hours. Afterwards from 22.00 hours until midnight, the first qualifying took place and the 911 GT3 RSR of Flying Lizard Motorsports driven by Patrick Pilet clinched top spot in the GTE Am class. The Felbermayr-Proton team 911 GT3 RSR of Marc Lieb took sixth place in the GTE Pro class.

The teams have a further chance to improve their times in two further qualifying sessions on Thursday, June 14, from 19.00 to 21.00 hours and from 22.00 hours to midnight.

Comments before the race
Hartmut Kristen, Head of Porsche Motorsport: “Through receiving double points for the World Endurance Championship, Le Mans has gained even more importance - particularly for our customer team Felbermayr-Proton who are contesting the new long distance championship with the Porsche 911 GT3 RSR.

“With their GTE Pro class win in Spa, the dress rehearsal for Le Mans went perfectly for our works drivers Marc Lieb and Richard Lietz. The current status of the Balance of Performance in the WEC makes it very difficult for our competitors in this category. Two important rivals have been permitted to compete with much larger restrictors than the 911 GT3 RSR and this gives them a considerable power advantage. Because around 75 percent of a lap is taken at full throttle as well as the long straights in Le Mans, this makes it even more upsetting. Aside from meticulous preparation, we and our customer teams will rely on balanced driver squads, the quality of the mechanics and the reliability of the Porsche 911. The less time spent in the pits, the better the chances are of achieving good results at a 24 hour race.

“We are well represented internationally in the GTE Am class with five vehicles and an exciting mix of young drivers and seasoned campaigners. This clearly shows that our private teams also support the development of young talent. Le Mans is extremely competitive so the decisive factor is who makes the least mistakes, or better still, none. The real challenge comes during the early morning hours on Sunday and it is crucial not to have suffered any setbacks by midday.”

Marc Lieb: “Racing at Le Mans is the best. Even when we drivers are totally focused on our job, you are still grabbed by the fascination of this extraordinary race. This year it’s not just about prestige but more about earning points towards the World Endurance Championship. And just like in Spa recently, we will have to fight hard from start to finish.”

Richard Lietz: “A win in Spa is of course greatly motivating, but Le Mans is still a totally different kettle of fish. A place on the podium would be nice, but it’ll be very, very hard to achieve. On the other hand, anything is possible at a 24 hour race where reliability is especially important.”

Wolf Henzler: “I’m really looking forward to racing with Marc and Richard again in Le Mans. After all, we won this fantastic race together back in 2010. Our main goal this year is to bring as many points home as possible for the Felbermayr-Proton team and Porsche towards the World Endurance Championship.”

Joerg Bergmeister: “Le Mans is the greatest race of the year. It’s a fabulous challenge for each and every driver and team. The extremely fast Circuit des 24 Heures is one of my favourites. I’ve competed here every year since 2002, so this marks my eleventh time. Still, every year I look forward to Le Mans.”

Patrick Long: “The key to success is teamwork. Especially in Le Mans you not only need a quick and reliable vehicle but an experienced pit crew.”

Marco Holzer: “Le Mans is an absolute classic. It’s a real tough race, especially in the GTE class with many good cars and many good drivers. In 2010 I stood on the podium as a rookie which was an indescribable feeling. Now I’m looking forward to my first race with the Flying Lizard crew.”

Patrick Pilet: “Le Mans holds a very special meaning for me as a Frenchman. I’m thrilled to be able to race here.”

LMGTE Pro class: This class is reserved for slightly modified standard sports cars with 440 to 500 hp and a minimum weight of 1,245 kilograms (e.g. Porsche 911 GT3 RSR).

LMGTE Am class: Like the LMGTE Pro, but the regulations stipulate that only last year’s cars are eligible and there must be no more than one professional driver per vehicle.