31 photos
The 2013 Commercial Vehicle Show got off to a flying start today with thousands of visitors flocking to Birmingham’s NEC. Crowds gathered to see world and UK premières of a host of new vans, trucks, technologies and associated products.

DAF Trucks were one of the first to unveil new Models at the Show.

With its Euro 6 XF heavy truck range launched late last year, DAF chose the Birmingham CV show for the worldwide premiere of its volume ranges, the CF and LF.
DAF’s Chief Engineer, Ron Borsboom, unveiled the two new ranges that currently account for the bulk of their UK sales. “Today the story continues and we present two more jewels in the DAF crown – the new LF truck for distribution applications, developed in the UK and manufactured in the UK. Also the Euro 6 CF, a very versatile truck for many different applications,” he said.
Apart from the necessary Euro 6 compliance, CF and LF operators can expect the same approach to modernisation and redesign as has been demonstrated in the XF. Covering the widest of weight ranges between them, the LF’s two-axle rigids from 7.5 to 19 tonnes, and the CF’s rigids and tractors from 18 to 44 tonnes, will make a significant impact as they upgrade the market leader’s offering.

Cool customers
The PX-5 (4.5 litre), and PX-7 (6.7 litre) engines that live in the LF and CF chassis take the same after treatment as the MX-11 and MX-13 units, together with chassis redesigns that have been driven by the need for revised, and much-improved cooling – it has had to up its performance by 40%. The need for better thermal control has forced DAF to make very extensive chassis changes, but it has taken the opportunity to kill several birds with this stone, by improving handling, cutting weight and boosting safety with a redesign of the cab mounting that allows the cab to move rearwards in heavy impacts and sacrifice the rear of the cab against the trailer, rather than injure the driver.

New looks
CF and LF get a familial look to them, in concert with the XF, and cabin interiors are either extensively revised or new. The LF’s dash looks particularly clean. The new multi-function steering wheel is aimed at keeping the driver’s hands on the wheel more than before and DPA (driver performance assistant) with a bold five inch colour display will be inescapable for most drivers. Borsboom was clear that the approach is to reward good driving and not to punish bad. “The DPA coaching system in not based on punishment,” he said. The new chassis take the same modular approach as the XF, in that major components can be sited in a number of locations around the chassis, depending on operator’s needs. Fuel and adBlue tanks, after treatment boxes, batteries and spare wheels can be shuffled to fit the bill. All the more need to get a salesman who is totally on the ball when it comes to specifying your chassis.

As Europe's largest commercial vehicle show of the year, the significance of the CV Show is huge for our industry. This high-profile status was reinforced as they hosted a visit by the Secretary of State for Transport, Patrick McLoughlin. He met a diverse range of industry stakeholders on his visit, discussing key issues and recognising the major investments industry has made - particularly in Euro 6 engines and fuel efficiency. 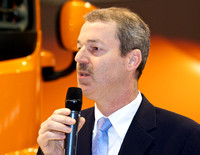 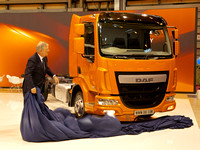 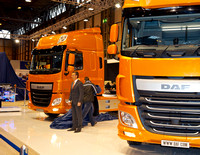 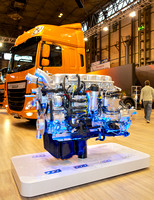