47 photos
Sofia Dourvari was brought-up in Greece and influenced by theatrical costumes and corseted dresses initially, but soon moved onto more modern shapes, always wanting to design clothes that flatter the female figure. The British Fashion Designer presented her Collection - Sofia Couture and here are The Official Photographs by Charles Davis of the First annual International Fashion Week held in Birmingham. Once a year, Spring Birmingham will become an international location for fashion and lifestyle professionals. During the Birmingham Fashion Week, fashion enthusiasts, buyers, trade experts and the media interact at shows and attend BHMFW ‘The Exhibition’ and off-schedule events.

As one of the world’s most iconic cities, Birmingham is the perfect place to host a Fashion Week of the very highest caliber. Inspired by fashion weeks in cities like Los Angeles, Rio, SanAntonio, NewYork and London. BHMFW is designed as a platform to showcase international and local talent, promoting the creative culture, supporting the local community and bringing international influences and designers to Birmingham. 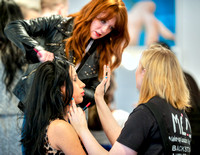