EVEN MORE POWERFUL AND USABLE: THE ENHANCED McLAREN MP4-12C 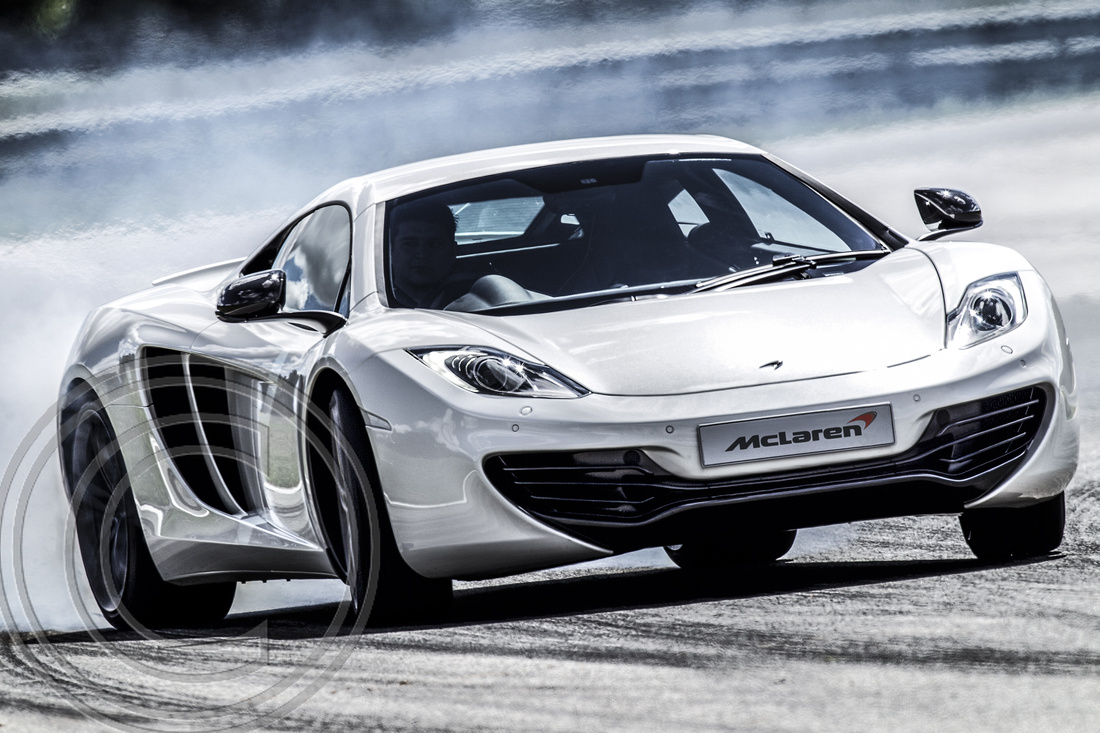 McLaren Automotive, rather than resting on its laurels, has instead announced a package of enhancements that will make its 12C high performance sports car even more invigorating to drive yet even easier to live with.

Headlining the changes is a 25PS power increase.  It takes the maximum output of the mid mounted, twin turbocharged V8 engine to 625PS (616hp) to give yet more vivid acceleration at track speeds with no loss in efficiency.  Modifications have been made by McLaren’s engineers to the 12C’s engine and SSG transmission increasing responsiveness.  Ease of use, a phrase not often associated with cars of this type, is further improved through a host of detail changes while a wider variety of paint, leather and wheel options give customers yet more scope for personalisation.  The 12C’s unique Intake Sound Generator (ISG) system, which controls the amount of engine intake sound heard in the cabin, is now programmable across three levels in all three Powertrain modes allowing the driver to select the amount of aural drama he or she wants to enjoy, whatever the road.  But one aspect that hasn’t changed is the 12C’s purposeful styling … apart from a subtle revision to the McLaren Speed Marque badge, that is.

This latest iteration of the 12C, which at launch set a new benchmark among its competitors for power, efficiency and pioneering technology, is available to order now at a price that starts from £176,000 in the UK. Customers who have already taken delivery of a 12C are not being neglected, though.  Every 12C owner is being offered a package of upgrades, including the extra 25PS, at no cost, underlining McLaren’s commitment to its customers ensuring they enjoy owning their 12C as much as they do driving it.

Antony Sheriff, McLaren Automotive Managing Director said: “Given our racing heritage, it is in our nature to continuously seek out improvements. The team at McLaren Automotive recognises that our existing and future customers deserve the very best product and service we can offer, and the launch of the enhanced 12C reaffirms its position as the most powerful luxury sports car among its competitor set.

“We designed and engineered the 12C from a clean sheet of paper, and I am delighted with the innovative technology package created for our first sports car. Our customers love driving a car with technologies and systems that have proved successful in Formula 1 and which create an incredible driving experience in a unique new high performance sports car. New and existing customers will now enjoy an even better experience thanks to the upgrades." 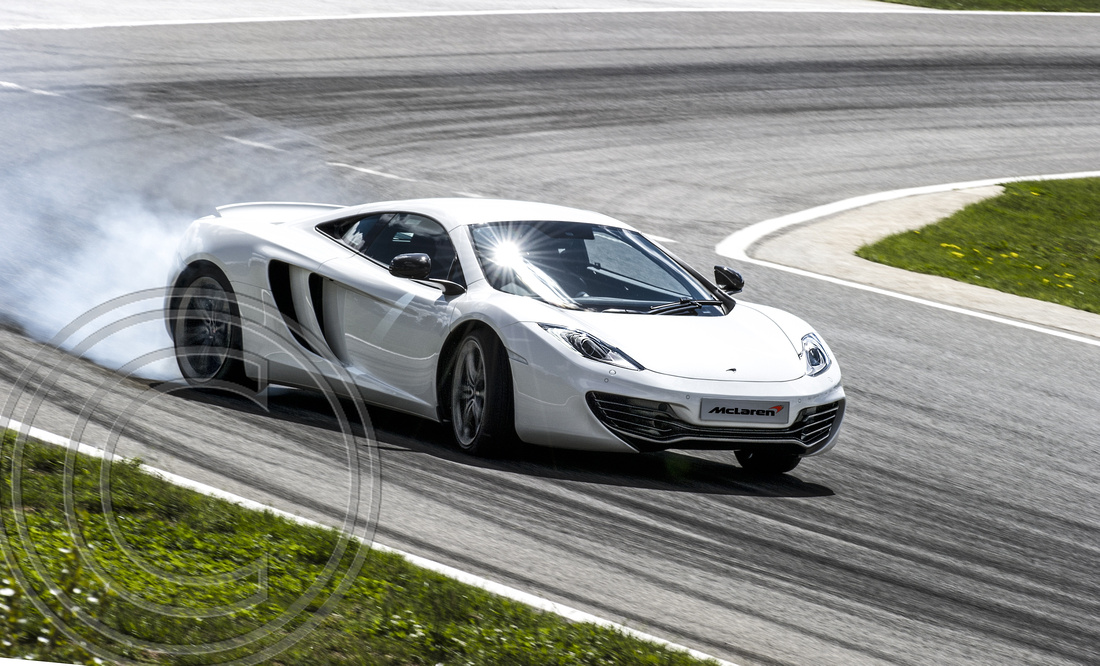 THE DETAIL: enhanced 12C overview
The suite of upgrades to the 12C specification from October 2012 includes enhancements to the 12C’s engine and transmission, in addition to other functional attributes.

A focus on drivetrain development has given McLaren Automotive’s engineers the opportunity to increase the 12C’s 3.8-litre twin turbo V8 output from 600PS to 625PS. The redesigned engine mapping has not altered the remarkable efficiency of the M838T engine, with 12C CO2 emissions remaining at just 279 g/km, and fuel economy recorded at 24.2 mpg (combined).

Modification of the 7-Speed SSG transmission to which the 12C’s high-powered engine is mated has resulted in crisper throttle response and improved clutch control for gear changes that are both faster and smoother.

The 12C features an innovative Intake Sound Generator (ISG). This system works by controlling engine intake noise within the cabin at differing levels, depending on the Powertrain mode selected for the car.  Moving up through Normal, Sport and Track Powertrain modes enhances the aural drama and driving experience of the 12C, with engine noise in the cabin changing when throttle power is applied and revs increase. With the 2013 specification 12C, the driver will be able to select the level of engine noise delivered in each mode through an electronic menu accessible via the instrument cluster. 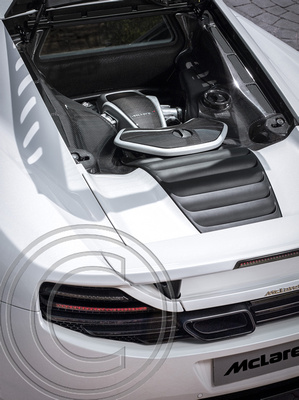 Improved usability and occupant comfort
A new door entry system is a feature of the new 12C. A small button mounted on each door replaces the 12C’s touch sensor system. In line with customer feedback, this modification is intended to simplify the user experience. The ability to unlatch each door using the 12C key fob will be retained.

To improve safety, an enhancement will be made to the headlight activation settings of the 12C. With the ‘AUTO-lights’ mode selected, the 12C’s headlights will be automatically switched on when rain is detected by the windshield-mounted rain sensor.

The 12C’s Climate Control System will be modified exclusively for 2013 models. In addition to the standard ‘AUTO’ function of the system; new cars will be supplied with systems inclusive of ‘AUTO LO’ functionality. This new setting enables the desired cabin temperature to be reached in the quietest way possible, using lower fan speeds.

New options to personalise the ultimate McLaren 12C
McLaren Automotive is committed to innovating through technology and design, and presenting customers with an exciting range of opportunities to specify their ultimate 12C.  Along with the power upgrade and technical revisions announced for the 2013 model year 12C, comes a selection of tempting aesthetic and functional options which may be added to the comprehensive standard 12C specification.

A stunning new high quality paint finish will be added to the options list for the new 12C. Volcano Yellow joins the ‘Elite’ set of paint finishes available for the revised model, and promises to be as spectacular as the popular Volcano Orange and Volcano Red finishes selected by many 12C customers since the car was launched in 2011.

A new wheel design and wheel finish available on multiple wheel designs will be offered to future 12C owners.  A new 5-spoke lightweight-forged wheel may be specified for the 12C and is available in multiple finishes. Standard Silver, optional Stealth and eye-catching Diamond Cut finishes are available on this new wheel design, as well as forged wheel designs available to order from the existing range. The Diamond Cut wheel finish is first finished in Graphite Grey, then diamond cut to reveal the forged metal surface. The entire wheel is then finished in a protective coat, which adds a high quality gloss to the appearance. 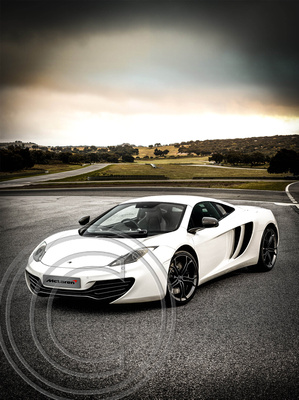 An exclusive new 12C interior trim has been developed by McLaren Automotive for 2013 model year 12Cs, which is a higher quality and more naturally textured leather than that in the current 12C options list.  If selected, exclusive semi-aniline leather is applied to all major interior surfaces including doors, seats, dash and the centre console. The new interior option includes flat piping around the perimeter of the seat and along the edge of the door card insert. The piping finish will be in Carbon Black unless requested in McLaren Orange, Harissa Red or Stone Grey. Three levels of this new interior trim will be available to order from June:

Racing Green, which to date has been an option for 12C buyers, and ‘Driver Zone’ interior options, will now be reserved for clients of McLaren Special Operations (MSO).  Selecting the ‘Driver Zone’ option will see a customer meet with MSO stylists to create a colour and trim scheme in the area immediately around, and including, the driver's seat. This is specified in contrast to the interior trim specified elsewhere in the cabin.

One Touch Seat Return is an added function of optional heated and electric seats for new cars, and will be available as an update to existing vehicles. With the pull of a lever, the seat will return to its position when the driver last exited the 12C. Easy-Exit - whereby the seat retracts to its most rearward position to allow for unhindered exiting of the 12C - will remain a feature.

Vehicle Lift will be available as an option on 2013 model year vehicles. The system allows the 12C to be raised front and rear for improved ground clearance. This technology permits the vehicle to be raised by up to 40mm at the front and 25mm at the rear, and may remain in position at up to 60kph. From race to road: McLaren Speed Marque
The McLaren badge, which carries the official moniker ‘Speed Marque’, will be modified and available in two different new finishes. Mounted on the front luggage lid, rear deck, steering wheel and wheel centre caps, the subtly revised Speed Marque may be specified in Rocket Red/Silver as standard, or Stealth/Silver as an option.

McLaren Automotive Sales and Marketing Director Greg Levine said: “The ‘Speed Marque’ is an important symbol of McLaren’s successful heritage in motorsport, and we are very proud that it features prominently on the 12C. The ‘Speed Marque’ has evolved significantly through the last five decades, from its origin as the ‘Speedy Kiwi’ on Bruce McLaren’s race cars in the 1960’s, through to the 1980’s and 90’s where the McLaren name featured a red chevron symbol alongside it on our Formula 1 cars.  Now displayed on the new 12C, it embodies our core product value of fast, streamlined movement and represents the pedigree of a multiple World Championship-winning Formula 1 team.”

Specification revisions a reward for existing 12C owners
Refinements to the 12C technology package will also be made available to McLaren’s valued existing 12C customers.

To date, McLaren Automotive has appointed 38 world-class retailers in 22 countries across the globe.  Each McLaren retailer in the new global retail network is now contacting existing 12C owners to offer each the opportunity to upgrade their current cars to a revised specification. Enhancements to existing 12Cs include the 625PS power increase introduced for the new 12C, and will be scheduled for application to cars later this year.

Antony Sheriff said: “A revised performance and technology package for the 12C highlights our determination and ability to enhance a vehicle that is already a benchmark sports car, and underlines our desire to reward customers that have shown commitment to McLaren.  I believe this action will reinforce existing customer relationships and I look forward to building long-term relationships with McLaren customers of the future.” The following package of specification upgrades will be offered to every current 12C owner at zero cost to the customer:

A groundbreaking sports car inspired by Formula 1
Performance and practical refinements will enhance the 12C’s innovative standard technical specification, in which Formula 1 DNA runs through every component.

With a one-piece moulded carbon fibre ‘MonoCell’ weighing just 75kg at its heart, the 12C features advanced vehicle dynamics technology including Brake Steer and Proactive Chassis Control.  Brake Steer is a technology McLaren introduced to Formula 1 in the 1997/98 MP4-12 race car and defines the 12C’s ability to set incredible lap times, by braking the inside rear wheel of the car through corners so that the 12C may retain the perfect ‘racing line’ on track.  ProActive Chassis Control is a suspension technology lauded by 12C owners due to its unique ability to provide executive car ride quality at any speed and on uneven road surfaces, yet its network of interconnected suspension hydraulics modify the amount of grip and roll control available when the driver adjusts the 12C’s ‘Handling’ settings through ‘Normal’, ‘Sport’ and ‘Track’ modes.  The 12C is the only sports car among its competitor set that allows the driver to select ‘Powertrain’ and ‘Handling’ settings completely independently of each other, so that the driving experienced is optimised to their preference and environment.  With a combined fuel consumption figure of 24.2mpg achievable from the car’s lightweight 3.8-litre twin turbo V8 engine, the 12C offers owners the option to enjoy driving a high performance sports car over greater distances and in a multitude of environments more than ever before. 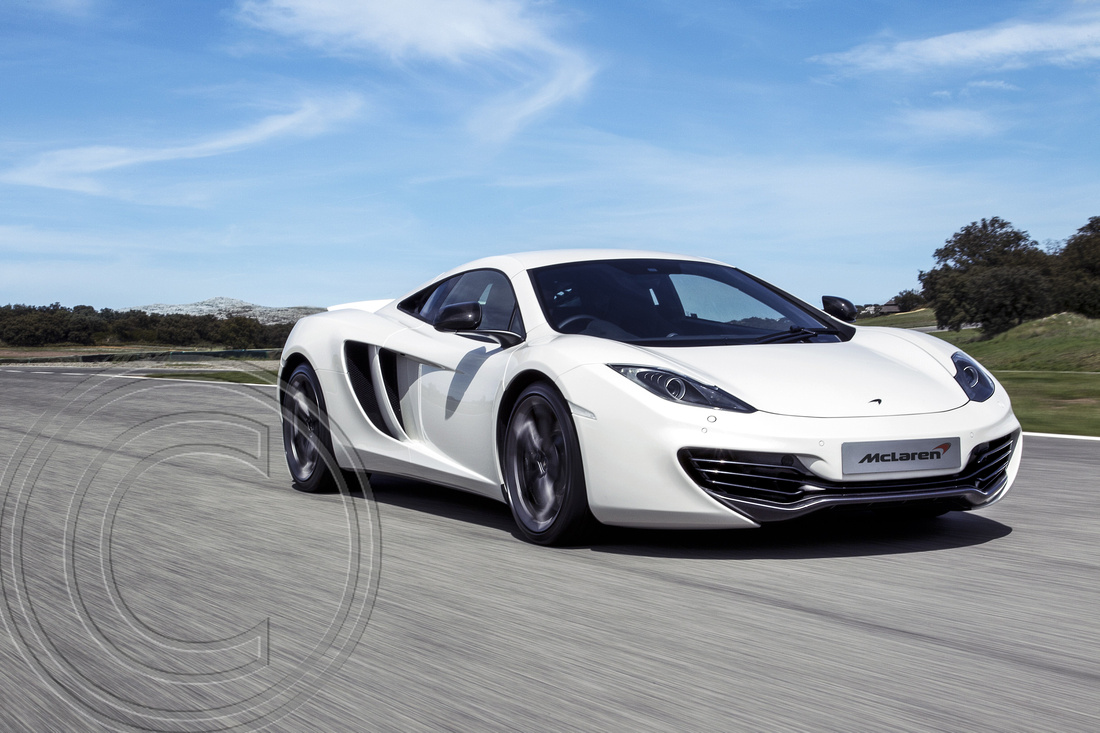